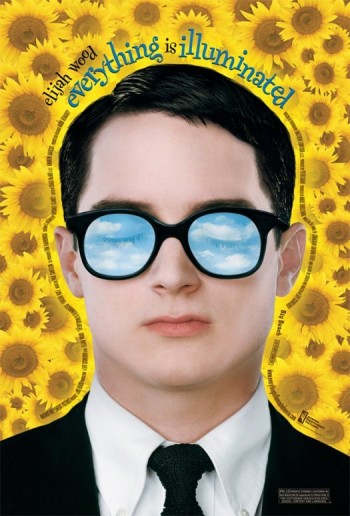 April Fool's, everyone! So, as you may have noticed, our next session is to be held at 12 AM for those who want to get some sleep on a Sunday morning. Our next movie is going to be a wonderful film starring Eugene Hutz of Gogol Bordello and Elijah called "Everything Is Illuminated". Английский предоставляется победителем Всеукраинской олимпиады по английскому языку, разгильдяем из Род-Айленда, соведущим Vinyl Club, Мишей Хохловичем. Перед просмотром мы разбираем новые и курьезные фразы Everything Is Illuminated (2005) 106 min - Comedy | Drama - 16 September 2005 (USA) A young man takes a strange and unexpectedly funny journey in search of a family heroine he's never known in this screen adaptation of the novel by Jonathan Safran Foer. Jonathan (Elijah Wood) is a lifelong collector of any and all objects pertaining to his family, and he has become obsessed with a woman he's never met. The woman saved the life of his grandfather during World War II, when the Ukrainian town where he was born was destroyed by Nazi troops. Wanting to know more about the woman, Jonathan flies to the Ukraine, where with the help of a hip-hop obsessed, gold-toothed tour guide and translator named Alex (Eugene Hütz), Alex's grandfather (a chauffeur who has claimed to be blind since his wife's death, played by Boris Leskin), and a dog named Sammy Davis Junior Junior, Jonathan searches for the meaning of the present that lies buried in the past, unexpectedly shedding the same such light on the lives of those around him. Director: Liev Schreiber Writers: Jonathan Safran Foer (novel), Liev Schreiber (screenplay) Stars: Elijah Wood, Eugene Hutz and Boris Leskin